9 Options to Remove, Hide or Play Down a Popcorn Ceiling 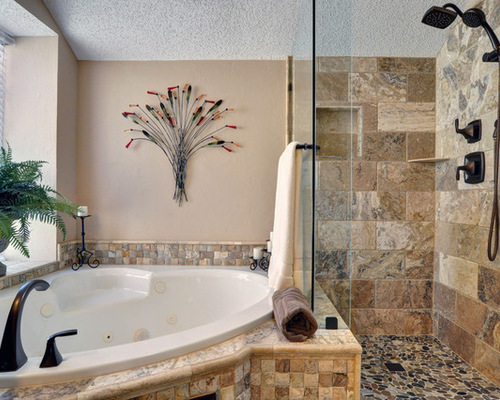 Don’t love your popcorn ceiling? You’re not the only one stuck with some unwanted stucco overhead. There are many options for moving on from it, but not all of them are equally effective — or equally easy. To help you decide how to address your popcorn problem, here are some top ways to remove, cover or distract from stucco ceilings.

Related: How to Decorate Your Ceiling

From the 1950s to the 1980s, so-called popcorn ceilings (with their prickly stucco texture resembling the popular movie theater snack) were a major architectural staple in America and many other nations.

Eventually the asbestos commonly used in the application was found to be toxic, and demand severely dropped.

However, a textured ceiling does have its advantages. It reduces echoes and hides ceiling plane imperfections, which is why it’s still used (in asbestos-free formulations) today, as shown in the bathroom here.

Despite its practical uses, popcorn ceilings, for many people, are considered an unfashionable eyesore, especially with contemporary demand for “clean lines.” Also, popcorn ceilings can gather dust and be difficult to clean or repaint, which means they don’t always age beautifully.

But don’t worry. You’ve got plenty of options.

The good news is a sprayed-on stucco coating can be scraped off to reveal the original ceiling surface, a process usually known simply as “ceiling scraping” or “stucco removal.” A specialist typically does this because (here’s the bad news) the process can be somewhat costly at around $1 to $2 per square foot. It’s a messy, labor-intensive process, hence the high cost.

Also, in some cases, the results may not achieve the crispness of a ceiling that had not been stuccoed in the first place, especially if the stucco has been painted over, which greatly complicates the removal process.

Even in the best cases the exposed ceiling will typically require at least some smoothing and patching to create a more even and crisp final product, which makes this an extensive and relatively challenging undertaking for DIYers.

While ceiling stucco no longer uses asbestos in modern applications, homes built before 1980 (or even in the early ’80s while old stucco products were still stocked) may include asbestos. If there is any doubt, a professional asbestos test should be conducted before any resurfacing, which could release heavily toxic dust.

One of the simplest alternatives to scraping is removing and replacing the ceiling drywall. Alternately, you can have the ceiling layered over with new drywall. The drop in the ceiling plane will often be minimal, and this method can encase asbestos rather than releasing it into the air, delaying the issue, if not resolving it.

Redrywalling a ceiling will cost closer to $4 to $6 per square foot, but the results will be more predictable.

Speaking of layering, there are many other materials besides drywall that can be installed over a popcorn ceiling, many of which add extra personality to a room.

Beadboard. Classic beadboard makes a charming ceiling treatment, and not just in a rustic cottage. Painted white, the subtle texture of beadboard paneling works well in traditional spaces or modern ones, adding a layer of depth in an unconventional place.

For a contemporary twist, try finishing the ceiling in a gloss paint, as shown here. This slow-drying finish will take more labor to complete, but the results have incredible depth and elegance.

Warm wood. If you’re not into painted beadboard, try multitonal wood for a rich, inviting treatment that’s great for a den or sitting area. Contrast it with white molding and crossbeams, or let the wood speak for itself. This approach works well with rustic decor, as a gentle touch in a modernist space or somewhere in between.

Pressed tin. Whether you use true pressed tin tiles or a fiber substitute, this classic ceiling look recalls speak-easy style and makes a great cover-up for a kitchen ceiling. You can paint it white or pale gray to keep the look breezy, or an inky dark hue (like charcoal or navy) for moody atmosphere. Or choose a metallic finish for extra sheen and drama.

Many companies now provide faux pressed tin and other panel systems specifically designed to cover stuccoed or damaged ceilings. They typically cost $1 to $5 per square foot.

To have a professional install these materials for you, expect to pay several hundred dollars extra.

Lighting. Sometimes the best way to deal with ceiling stucco is to de-emphasize it, and smart lighting choices can go a long way toward that.

Notice how the lighting hitting this stucco wall emphasizes the texture. Great when the effect is desired. To avoid highlighting unwanted ceiling stucco, choose lights that aim downward, rather than upward or outward, so light is cast on beautiful surfaces below and not on your ceiling itself.

Try pot lights, or semi-flush-mounts (or pendants) with an opaque shade to aim light downward rather than multiple directions.

Paint. Ultimately, the best way to deal with a popcorn ceiling may simply be to learn to live with it. Think about it: How many people do you know who live with popcorn ceilings? I bet you can’t specifically remember who has it or doesn’t, because unless a ceiling is highlighted, we don’t typically spend much time looking at it.

Try painting the walls and the ceiling the same color to blur the lines between them, and then create drama at ground level to draw the eye down. You’ll soon forget about your stucco altogether.

Related Articles
Housing Trends How to Reduce Noise in an Open-Plan Design Open-plan living spaces have many advantages for family life and entertaining, and they increase the opportunity to bring lots of natural light into your home. But they can end up being quite noisy. You may be surprised, however, at how easy it is to reduce sound travel with a few key additions to your furnishings. There […]
Housing Trends How to Step Up Your Entry Design With a New Welcome Mat Right before the guests ring the doorbell or give the front door an old-fashioned knock, they step on your welcome mat. This mat serves two purposes: catching debris and adding style. Here are some ideas for how to give this entry detail a refresh before the hustle and bustle of the holiday season begin. Welcome […]
Housing Trends 5 Mid-century Modern Homes That Make the Most of Their Small Design Mid-century modern homes were small out of necessity. Money was in short supply after World War II, so architects and builders had to keep houses compact yet functional to stay within homeowners’ budgets. At the same time, lifestyles were changing. Smart architects took on a new approach and designed homes with an open feel, which differed […]